How does radar it work:

A radar sensor measures the distance and speed of an object by measuring the reflection of the radio waves that strike it.

The system is composed of a transmitter and receiver. The transmitter transmits electromagnetic waves, while the receiver captures the waves reflected off of an object struck by them, when they bounce back towards the transmitter.

By analyzing the differences between the emitted and received waves, it is possible to calculate the distance of the object that reflected the waves, its speed and estimate other properties of the object.

Electromagnetic waves are extremely resistant to disturbances, like dust, debris, smoke, fog or darkness, and they travel at the speed of light, approximately 300,000 km/s.

What does a system consist of: 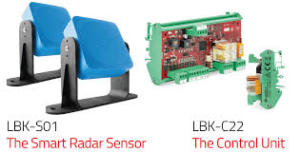 The control unit can handle up to 6 radar sensors. It has 1 Safety Output, 2 relay outputs for other signaling devices such as light towers and 3 configurable inputs for muting and other functions.

Easy to use software is used to configure the system. It also provides system status, system validation and maintenance functionality. 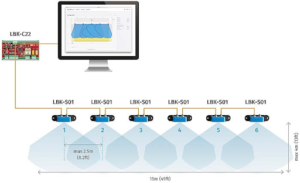 What else do I need to know: 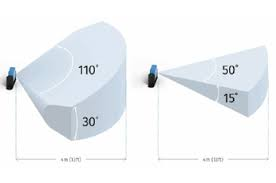