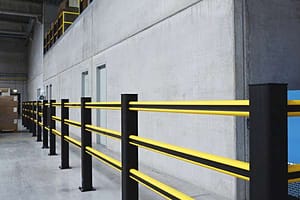 Many years ago I was in a college class which was taught by an old crusty highway patrol officer. I have never forgot, but on the first day of class he said he does not allow the use of the term, “traffic accident”. He required us to use the term “traffic crash” instead. He believed the word “accident” implies that a traffic crash was simply, “chance” or unavoidable. His belief was that all traffic crashes were avoidable, and hence, not an “accident” at all. Whether you believe that or not, I tend to think that an extremely high percentage of crashes are avoidable, even most of those caused by mechanical failure. When you have the ability to control your environment (inside your facility) and you can eliminate weather or other nature related factors, it seems there are few excuses that remain for allowing “crashes”, “near misses”, “collisions” or whatever you want to call them, to occur.

If we don’t even consider those injured or killed while operating forklifts and similar vehicles (and it’s a huge number), on average, approximately 20% of all forklift related fatalities are people who are not even operating a forklift. They are on foot, working or walking when they are struck, pinned, hit by a load or run over. That means hundreds of people will die in the years to come, simply because we could not, or in many cases, would not segregate pedestrians from forklifts and other similar vehicles, or otherwise offer warnings to drivers and pedestrians of impending contact between the two.

In many cases, we can separate people from vehicles in motion with barriers, such as Boplan handrails and guardrails and in other cases where workers often work in the same areas where forklifts operate, we can greatly reduce these risks by introducing technology from Claitec. Check out the Pedestrian Alert System video here.

Don’t wait for a an injury to occur on your watch when you can do something about it now. For a free consultation or review of your facilities current safety systems, or if you want to know how you can improve safety, contact Bulwark Safety Systems before an “accident” or rather….a “crash” occurs.

At Bulwark Safety Systems, we believe every employee deserves to go home safe at the end of their workday